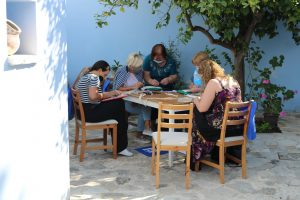 A Lefkara lacemaking workshop for beginners brings together history, artistry and a satisfying sense of community and achievement, Annette Chrysostomou discovered

Traditional lace making in Lekfara will never be what it once was, but that does not mean it’s dying.

An event I attended last week convinced me there is a future for this ancient craft, albeit very different from the traditional goal in the past of master lacemakers from the village competing with each other to sell their wares abroad.

It took just one morning for many of my preconceived ideas of an end to an era to melt away. The Lefkara-based Cyprus Society for Education through Arts is conducting workshops for anybody who is interested in getting just a taste of making the laces, and perhaps even try their hands at more advanced techniques, and I went along one day last week.

As the future of lacemaking by hand surely lies largely in the hands of people who are interested enough to attend the workshops, who attended the workshops with me was of vital interest.

They are certainly not female pensioners with nothing better to do, but a group of young and middle-aged professionals who for various reasons want to keep this art alive, whether for their own satisfaction or to be able to teach it to others.

“It brings back a way of life,” commented Katerina, 37, who travelled from Limassol for the day. “When you hear the stories, you become part of a tradition. The passion for it hasn’t gone away. It is contagious, it energises you.”

“We used to learn it in school, but they don’t teach it anymore, so now we come here,” said Nadia, a young lawyer who lives in Nicosia.

The participants all agreed it is also calming and relaxing, as they sit, chat and work together, and they commented it even helped them forget their fear of the coronavirus, the virus being a big concern for many of them at the moment. More about the relaxing part later.

They also pointed out that an event such as the one we attended is exactly what is needed, as the older people who still know and value the art may not be the ones best suited to promote it, especially on social media.

“They may not know how to keep the spark alive,” said Nadia, whose father comes from Lefkara. “When I said I am coming here, my aunt said ‘But I could have taught you’ but she never taught us or my cousins, her children.”

As we chatted during the workshop, Nadia contributed one story to the group which provided a closer understanding of the village and its traditions, particularly useful for an outsider like me who has previously only had a vague idea of what goes on in Pano Lefkara.

My previous experiences of the village is of walking down its pretty streets lined with small shops where owners outside would try to coax me inside in attempts at getting hold of my money, and I had doubts regarding the authenticity of the products, as the wares displayed outside the shops were obviously not made by skilled villagers but more likely imported from China.

“My great grandfather, who was an old man in 1985, was one of those who used to travel to many countries in Europe to sell what the family had produced. So he used to put on his European suit and over the years learned many languages. When he came back he changed into traditional clothes and was sitting on a chair outside. So when German tourists came they were amazed seeing this old man talking to them in very good German.”

So some of it at least is not about capitalism but simply the locals wanting to communicate and showing they had seen a bit of the world.

‘When my grandmother was young, she had to earn a living from 10 years old when she left school and that meant she had to be a professional by then, starting to learn from when she was about three years old,” Nadia said, adding another piece of information about the culture in the village.

And those Chinese tablecloths?

One of our teachers Rita Raouna explained.

“They have to sell both, the Lefkara laces are expensive so they also sell the others which are much cheaper and in demand by tourists. Of course they can’t hang the handmade laces outside and expose them to the sun and dust, but if a visitor goes inside they will be offered the real laces as well.”

Understandable, as who would hang outside a tablecloth which took two years to make and costs €4,000?

Our teachers are those women you may see sewing in the streets of Lefkara – who have a tremendous knowledge about lacemaking.

And the men? Surprisingly, at least to me, many of them also used to embroider. For one, in the days before internet and other diversions, it was a way to keep all children quiet and occupied, Phoivi Antoniou, who organises the workshops, said.

“Also, many families were poor, so the men learnt and they were a back-up when more income was needed. They didn’t sit in front of the shops like the women but were in the background.”

What about lace making nowadays?

The Lefkara handicraft centre, where the workshop was held, is tucked away in a street behind the busy main street of the village, which is appropriate as it is quiet yet beautiful – much as the process of lace-making itself.

It is not easily kept alive in an age where there are indeed many other distractions. Thus, nowadays, though a number of people know about the basics, there are only four or five women know the whole range of techniques and how to make the most beautiful and complex designs. Their offspring are not interested to learn, and it can’t be done in a day, a year or even a decade.

These days, Raouna, said, a person can only earn €250 a month when working on it for six hours every day, “but how many people are willing to do that?” She believes however “younger people may be interested in the art, though they may not become master teachers, they are using the designs on their shirts, or as bags, to show their identity.”

Not so long ago, in 1974, the situation was different.

“I was eleven years old and got two shillings for the laces I did, and that was enough to cover the cost of an ice cream for every day for a week, instead of having to ask my mother for the money. It was a big deal. Plus I loved doing it,” Raouna said.

One does indeed have to love doing, as I found out trying a few basic stitches. It was far from easy and I didn’t accomplish much though other people in my group did much better. What I did learn is it is indeed very rewarding and relaxing.

It cannot ever become boring as there is no fixed design, and the artist can decide what to do with each space. Then there is a lot of counting the stitches, which is great for calming the mind and improving memory.

What is needed, though, is good eyesight or strong glasses, as it is intricate work.

The easiest thing to do is the Choulouri or the outline. “The centre piece in the middle is the most visible, thus the most intricate work has to be done in this part, while the outline is under the table and is mostly hidden,” Raouna said.

“You can’t learn it in a day or a month or even in a year” is the verdict of the masters.

But though there are few of them, the art is being kept alive. As Rauona pointed out, students in schools have a new idea of how to use the designs. “Young people feel different, they embroider a design on their skirts or a blouse or a bag. The traditional takes on a new meaning.”

The Cyprus Symphony Orchestra will soon wear belts made out of lace, another new development. The government has ordered 150 of them from the local handicraft centre.

More than anything, lacemaking is a communal activity.

“During my grandmother’s time,” Nadia said, “the women would sit around an oil lamp in one of the houses, and the next day they would move to another house and sit all together and work and talk.”

Our workshop showed some of this still applies. The feeling of learning such an amazing new skill together with others and with very patient and skilled teachers at hand left me wanting to do more of it – hopefully soon.

More workshops are planned for both beginners and advanced pending coronavirus measures. Watch this space:

Emilianidou still critical, president to visit her on Wednesday