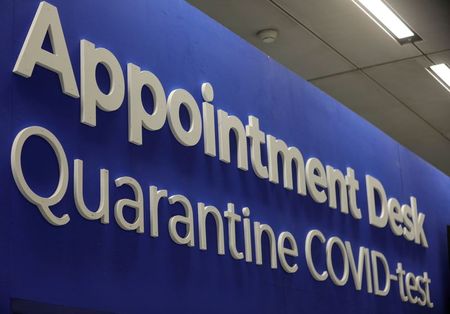 A couple accused of trying to escape from Covid-19 quarantine in the Netherlands after testing positive for the coronavirus have been transferred to a hospital where they were being held in isolation, an official said on Monday.

The pair, identified by Dutch authorities as a Spanish man and Portuguese woman, left the hotel where travellers who tested positive for the virus were staying after arriving at Amsterdam’s Schiphol airport from South Africa.

“They have now been transferred to a hospital elsewhere in the Netherlands to ensure they are in isolation. They are now in so-called forced isolation,” said Petra Faber, spokesperson for Haarlemmermeer municipality, where Schiphol is located just outside of the capital.

The couple fled the hotel on Sunday and had boarded a plane to Spain when they were detained by military police at the airport, said Faber.

Speaking to Catalonia’s public television channel TV3, however, one of the pair, Carolina Pimenta, denied they had deliberately tried to evade quarantine.

Pimenta, who was travelling with her partner Andrés Sanz, said she had thought she was exempt from a five-day quarantine order because she had a negative test result and had already contracted Covid-19 in the past six months.

Pimenta said she had been permitted to leave the hotel by Dutch police and health officials and cleared all airport security checks with her passport and results of a PCR test.

Just after boarding “suddenly they called me. Acting very aggressively, police treated us like criminals when their own colleagues had given us the authorisation”, she was quoted as saying.

Dutch authorities said the couple were among 61 out of the more than 600 passengers who arrived on two flights from Johannesburg and Cape Town on Friday and tested positive for Covid-19.

The flights had arrived just before the Dutch government changed its rules on travel from southern Africa due to concerns over the newly identified Omicron coronavirus variant.

At least 14 of those infected have the Omicron variant, Dutch Health Minister Hugo de Jonge said on Monday.

Dutch authorities are also seeking to contact and test some 5,000 other passengers who have travelled from South Africa, Botswana, Eswatini, Lesotho, Mozambique, Namibia or Zimbabwe.

In the Netherlands, tougher Covid-19 measures went into effect on Sunday to curb record daily infection rates of more than 20,000 and ease pressure on hospitals.