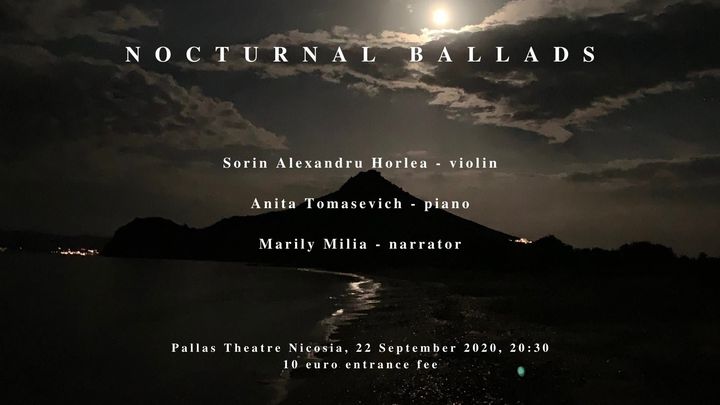 NOCTURNAL BALLADS
With the intention to create a concert program out of most famous encore pieces for violin, Cyprus based violinist Sorin Alexandru Horlea started a long process of selection.

His search became ultimately a quest for deepest expression of the strongest human emotions – of love and loss.
The pieces that followed were all set in the nocturnal mood expressing love and loss of romantic nature, one’s country or nation, and faith in a possible salvation through both.

At the proposal of the sound engineer and a close friend Giorgios Argirides he decided together with the pianist and his duo partner Anita Tomasevich to record a CD under the name “Nocturnal Ballads”.
With Giorgious Argirides as a soul of the whole recording, patiently bringing everything together with the minimum of means and the generosity of the Pattihio Theater as the CD producer,
the Nocturnal Ballads were born. ..

With the pianist Anita Tomasevich and renowned Cypriot actress Marily Milia they will portray the conversations with one’s self in the solitude of the nocturnal nights using selected poems and theatrical influences to accompany the music live at Pallas (Nicosia) and Pattihio (Limassol) Theaters.