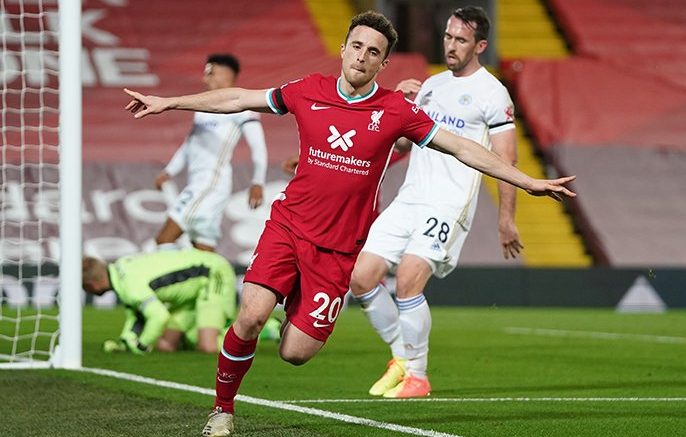 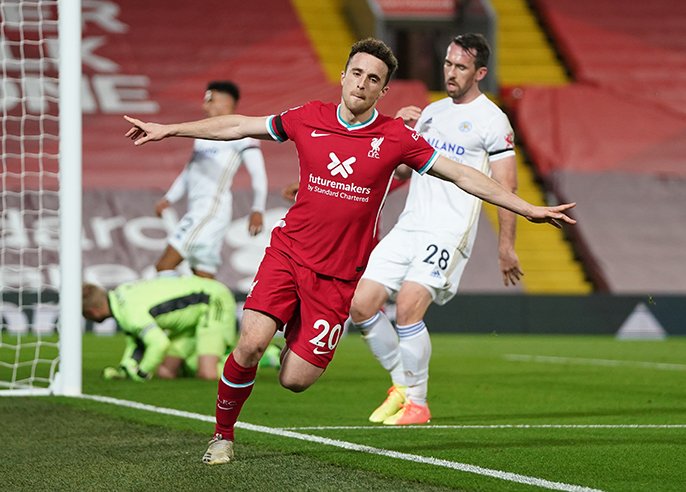 Liverpool set a new club record of 64 straight unbeaten home league games with an impressive 3-0 win over Leicester City at Anfield in the Premier League on Sunday.

An own goal from Jonny Evans and headers from Diogo Jota and Roberto Firmino, continuing his streak of scoring in his first four league games at Anfield, were enough to give Juergen Klopp a victory over his predecessor Brendan Rodgers.

The result moves defending champions Liverpool level on 20 points with leaders Tottenham Hotspur while Leicester are fourth, level on 18 points with third-placed Chelsea.

Liverpool grabbed the lead in the 21st minute when Evans, under pressure from Sadio Mane, headed a James Milner corner into his own net.

Leicester responded with a smart break with Jamie Vardy finding Harvey Barnes in a promising position but the left-winger’s effort was well wide of the target.

Liverpool’s second was a masterfully worked goal with Andy Robertson whipping in a delicious cross from the left which Jota met at the near post with an expertly angled glancing header.

Leicester keeper Kasper Schmeichel pulled off a series of saves to deny the home side after the break while Firmino twice hit the post and had an effort cleared off the line.

The Brazilian, who had scored just twice in his last 23 Premier League games, got his reward four minutes from the end with a fine header from another Milner corner.

Ten-man Arsenal hung on for a 0-0 draw at Leeds United in the Premier League after their winger Nicolas Pepe was sent off in the 51st minute on Sunday.

VAR officials spotted that Pepe had headbutted Ezgjan Alioski and referee Anthony Taylor took a quick look at the monitor before brandishing the red card.

Marcelo Bielsa’s Leeds had been the better side even before the sending off with striker Patrick Bamford twice forcing Arsenal goalkeeper Bernd Leno into action.

Leno did well again to keep out a fierce drive from Stuart Dallas and then substitute Rodrigo crashed a shot against the bar from the edge of the area.

Arsenal, who are without a goal from open play in almost eight hours of football, nearly grabbed a winner, against the run of play, when Hector Bellerin put Bukayo Saka through on goal but he was unable to round Leeds keeper Illan Meslier.

Leeds struck the woodwork twice in the latter stages with Bamford heading against the post and Raphinha also striking the upright deep in stoppage time.

Bielsa was left to rue his team’s failure to find the net despite all their pressure and efforts on goal.

Arsenal boss Mikel Arteta reluctantly agreed the draw was an acceptable result for his team, given they played almost half the game a man down.

“It is a point. I am never happy with a draw but considering the circumstance it is one we take and move on,” he said.

Asked about Pepe’s dismissal, Arteta had a blunt answer: “It is unacceptable. Unacceptable. At this level you cannot do it.”

The Gunners are 11th on 13 points from nine games after their first draw of the season with Leeds 14th on 11.

Everton‘s in-form striker Dominic Calvert-Lewin netted a brace and midfielder Abdoulaye Doucoure scored his first goal for the club as they beat Fulham 3-2 to return to winning ways in the Premier League on Sunday.

Everton‘s rise to the top of the table last month delighted supporters but the early optimism had faded somewhat after three straight defeats before the encounter at Craven Cottage. Carlo Ancelotti’s side did not wait long to reignite their season.

Brazilian forward Richarlison, returning from a three-match ban, picked up a loose ball and ran wide to cross for Calvert-Lewin who tapped in his ninth league goal of the campaign 42 seconds into the contest.

Fulham hit back through Bobby De Cordova-Reid’s neat finish on 15 minutes but Everton continued to threaten and were unlucky not go ahead 2-1 as Calvert-Lewin’s effort was chalked off for offside and Richarlison’s low shot was pushed away.

The visitors carved Fulham open again as Alex Iwobi switched play from the right and James Rodriguez fed Lucas Digne, who produced a first-time ball for Calvert-Lewin to stroke in and top the season’s scoring charts.

Digne looked lively in an advanced role and was involved in Everton‘s third, firing in a cross for Doucoure to head home in the 35th minute and open his Toffees account after joining from Watford in the close season.

“It was a difficult game, difficult to prepare. It was a good first half… in the second half we lost energy and had difficulties,” Ancelotti told reporters.

Fulham pulled one back shortly after Ivan Cavaleiro slipped and missed a penalty in the second half, as substitute Ruben Loftus-Cheek scored via a deflection off Everton defender Yerry Mina to ensure a tight finish.

“There were individual errors but I’m not looking at that,” Fulham boss Scott Parker said.

West Ham United striker Sebastien Haller’s thumping second-half strike condemned Sheffield United to a 1-0 Premier League home defeat on Sunday that leaves them rooted to the bottom of the standings with a single point after nine games.

Though the visitors dominated possession in the opening 45 minutes, the Blades created several opportunities with striker Oliver McBurnie going closest with a header that forced a fine save from Lukasz Fabianski.

Their wasteful finishing was punished in the 56th minute as West Ham won the ball in midfield and worked it up to French-born Ivory Coast striker Haller, who drilled a thunderous shot into the top corner via the fingertips of Aaron Ramsdale.

Haller had a chance to double his side’s advantage but he somehow fluffed his first-time shot from Arthur Masuaku’s centre, steering the ball wide of the target in the 70th minute.

West Ham’s Declan Rice could have put the game beyond doubt three minutes later but his header from Aaron Cresswell’s corner hit the woodwork and bounced to safety.

Scorer of six league goals last season, Scotland striker McBurnie has yet to open his account this term but his aerial ability and tireless running caused problems throughout as Sheffield United poured forward in search of an equaliser.

He finally beat Fabianski in the 75th minute, but his left-foot shot hit the crossbar as West Ham hung on for a win that moves them up to eighth place on 14 points.

The Blades remain bottom having scored just four league goals, and wing-back George Baldock could not hide his disappointment at the final whistle.