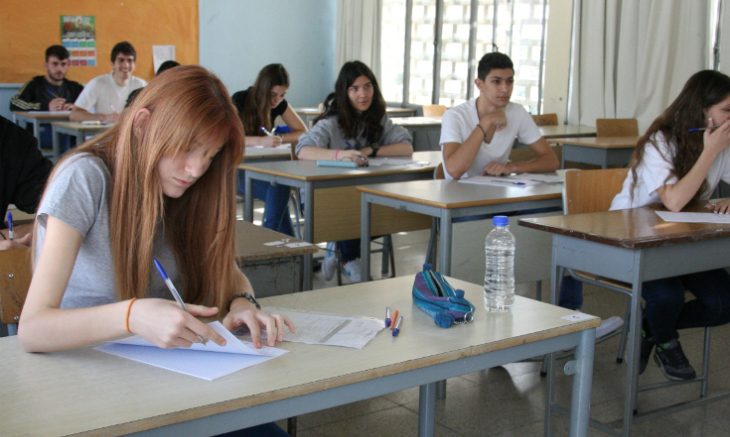 The embattled twice-yearly exams programme came in for further criticism on Monday, as Akel reiterated its call for them to be scrapped and MPs discussed various proposals to reform the policy.

The House education committee held an urgent meeting on the matter amid renewed criticism of the programme. Last week, hundreds of students protested outside the presidential palace calling for an end to the twice-yearly exams.

Committee chairman and Diko MP Pavlos Mylonas said that there appears to be a lack of time to cover the material, proposing that the school-day could be altered, to last from 8:30am to 4pm instead of the current 7:30am to 1:30pm.

Education Minister Prodromos Prodromou insisted that the exams are being implemented successfully, however he acknowledged that there are some shortcomings.

Discussions on the matter will stretch into summer, the committee heard, with hopes that tweaks to the system will be made.

He said that internal studies carried out at the ministry showed that the policy – which has been in place for three academic years so far – is a success.

But Prodromou said that the ministry will look into reducing the number of tests being carried out while keeping with the twice-yearly programme overall.

Mylonas offered that while the number of tests can be reduced, other forms of evaluation could also be introduced.

The committee also heard accusations that main opposition Akel was deliberately undermining the process of the new examination system – with Disy MP Giorgos Karoullas accusing them of only adding to students’ stress.

Karoullas said that Akel was undermining the education ministry’s policy by calling it into question with its persistent criticism.

For their part, Akel MP Christos Christofides said that his party has a solution to the problem: passing a bill to scrap the twice-yearly exams.

That, he said, would finally force the government into discussing a new form of evaluating students which is supported by parents, teachers and the students themselves.

The health ministry’s public health service recalled on Wednesday basil and mint from two brands because of a failure to list a potential allergen among ingredients. Both herbs were found to contain celery, which is an allergen and could potentially cause issues to those allergic to it. The specific ingredient… Cyprus Mail …

The shirt worn by Diego Maradona when he scored his famous “Hand of God” goal will be on display as part of an exhibit that will open ahead of this year’s World Cup, the 3-2-1 Qatar Olympic and Sports Museum said on Saturday. The blue jersey, which sold at auction… Cyprus Mail …

Syria said on Monday that 29 people had died of cholera in what the United Nations has called the worst outbreak of the disease in the war-torn country for years. Rapid assessment testing has confirmed 338 cases since the outbreak was first recorded last month, Syria’s health ministry said in… Cyprus Mail …

A monument commemorating Strovolos residents who died or went missing in 1974 has been vandalised, Strovolos municipality announced on Thursday. In a written statement, the municipality described the damages to the monument located in a municipal park by Thesprotias Street in Strovolos. The statement said that a complaint has been… Cyprus Mail …

Son Heung-min ended his scoring drought in stunning fashion with a sublime hat-trick as Tottenham Hotspur crushed Leicester City 6-2 to move joint top of the Premier League on Saturday. Rodrigo Bentancur’s first goal for Tottenham was separating the sides in an entertaining tussle but Son, who started on the… Cyprus Mail …