Having endless fun is guaranteed once you stop off the island. All cities have a plethora of nightclubs and bars, which promise an unforgettable time.

The main clubbing spot, in Cyprus is Ayia Napa which is internationally known as one of the ultimate party cities; Limassol follows second on the nightlife scale followed by Paphos, Larnaca, Protaras and of course Nicosia.

In the summertime fun takes a whole new meaning here in Cyprus. Fun music, non-stop dancing, exclusively made drinks, great weather, amazing people and funky clubs located on the beach: What else would you ask for a magical night on the island?

Bars and pubs in Cyprus close around 2.00 am whilst nightclubs stay open until the early hours of the morning.

The busiest time of year in Ayia Napa is late June until early August when there are around 8 weeks of madness. Big events with top name acts, worldwide DJ's and special guest appearances all happen during this time.

The summer season in Ayia Napa actually runs from April until October so if you come outside the peak times you will still find plenty going on. Most bars and clubs open up during April or May and most don't close until October.

Before Ayia Napa became the party capital of Cyprus and quite possibly the entire eastern Mediterranean, Limassol had the most diverse and exciting nightlife on the island. Although it is a more toned down version of Ayia Napa, the city still has its merits and there is still a nice assortment of less crowded bars, cafés, clubs, pubs, and restaurants to choose from for your evening’s entertainment. Despite the smaller crowds, the nightlife here is much more refined.

Since opening its doors, Soho Club has set the standard for style and luxury not only in Ayia Napa but across Cyprus. Set over three different levels each of which provide their own panache and all serving a wide selection of drinks, including an impressive cocktail selection.
Read More 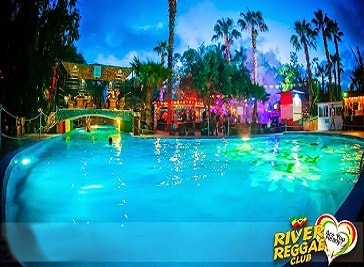 Consistently rated as the most entertaining and exciting after party club in Cyprus, River Reggae has dominated Ayia Napa’s nightlife in a sensational fashion since 1996. As the people’s choice with its unique tropical character surrounded in an exotic environment, River Reggae boasts with the largest outdoor open air bar area in Cyprus inviting up to 2000 guests, large river swimming pool and the most famous rain, foam, and bikini parties of the island.
Read More