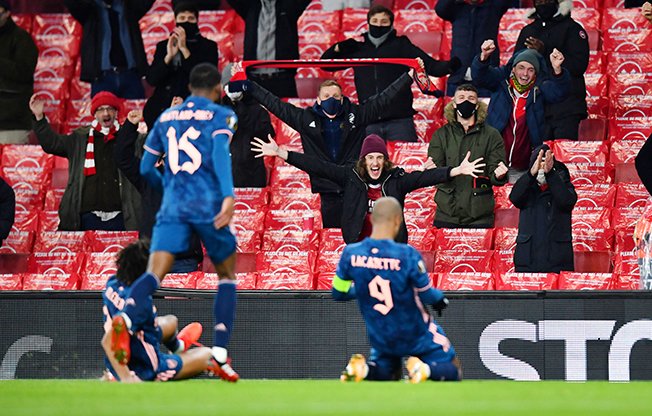 Arsenal’s fans had waited nine long months to return to the club’s north London stadium but the 2,000 people sprinkled across the red seats had to wait only nine minutes to enjoy the thrill of celebrating a goal in the flesh on Thursday.

Appropriately, it was Frenchman Alexandre Lacazette who struck the opener in a 4-1 victory against Rapid Vienna — the same player who 272 days earlier had scored the winner against West Ham United, days before the COVID-19 pandemic swept in.

After a three-month hiatus, English soccer cranked back into action in June, but the country’s gleaming Premier League stadiums have since been eerily silent and sad places on match days — stripped of atmosphere.

With the capital placed in the government’s Tier Two restrictions following the end of national lockdown, Arsenal were the first top-flight club to have the opportunity to open the turnstiles to a limited number of fans.

Normally a dead-rubber Europa League group game against such modest opposition, with Christmas looming, might have been an excuse for a night on the sofa or the local shopping centre.

But it felt like a momentous occasion for the lucky few with tickets on a cold and damp north London night.

“I’ve been coming since the Emirates opened (in 2006). It means absolutely everything,” 25-year-old fan Josef told Reuters before kickoff.

“I felt quite emotional on the walk over here — just the sort of buzz of seeing people back in scarves, back in hats, back in kits. It means the world to be here.”

Another fan Stevan Rowan added: “Since last year there’s been nothing to do. Going to games just makes everything a lot better than what it was.”

Once inside and socially-distanced in neat lines, most wearing face coverings, it felt like business as usual.

Much-loved mascot Gunnersaurus, threatened with extinction a few months ago because of cost savings, plodded around the touchline and it did not take long for the fans to get their lungs working with a rendition of “We Hate Tottenham”.

Arsenal’s players applauded the fans before kickoff and when Lacazette smashed home his side’s opening goal the whole team joined him on the touchline to milk the applause.

It was music to their ears.

Further goals by Pablo Mari and Eddie Nketiah raised the decibel levels again. Koya Kitagawa pulled one back for Vienna just after the break but there was no recriminations.

Instead the fans were on their feet again when Emile Smith Rowe rounded off a comfortable Arsenal win.

Omonia back on top, Salamina in trouble in Cyprus playoffs