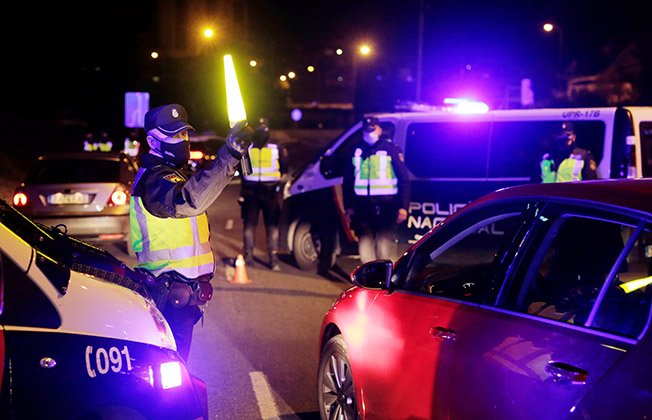 Police set up controls and stopped cars on major roads into and out of Madrid on Saturday as the city went back into lockdown due to surging coronavirus cases.

Some 4.8 million people are barred from leaving the capital area, while restaurants and bars must shut early and reduce capacity by half.

The new restrictions, which started on Friday evening, are not as strict as the previous lockdown in March, when people were barred from leaving their homes.

However, authorities advised residents not to move around unless absolutely necessary. Travel is banned except for work, school, health or shopping.

“There are fewer people then we’re used to, shops are empty, bars are empty, there’s a feeling of sadness,” said Valerio Rojo, director of the Circulo de Bellas Artes cultural organisation.

“We had reservations but a lot of people have called to cancel them,” said Macarena Molina, who works in a hostel in central Madrid. “Today, we had a reservation through Booking and they cancelled just an hour before saying they were not going to travel because of the restrictions.”

The latest measures ordered by the Socialist-led central government were reluctantly imposed by the conservative-led Madrid government, which said they would cripple the economy.

Madrid’s bars and restaurants must close at 11 p.m. instead of 1 a.m, while restaurants, gyms and shops must cut capacity by half. Gatherings of more than six people remain banned.

Near the Plaza Mayor square, usually packed with tourists on a Saturday lunchtime, waiter Luis stood, menu in hand, trying to drum up business.

“No one is walking past here,” he said. “I don’t know how much longer we are going to keep our jobs.”

With 850 cases per 100,000 people, according to the World Health Organization, the Madrid area has Europe’s worst rate.

Spain had 789,932 coronavirus cases as of Friday, up by 11,325 since Thursday, and there have been 32,086 fatalities. Daily deaths are around their highest levels since early May although far below the late March record of nearly 900.