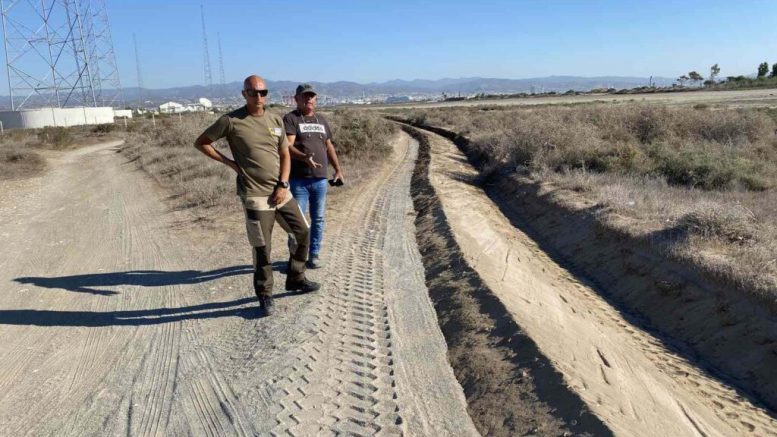 Aside from changing the face of the area and offering a much-needed sanctuary to migratory birds that transit through the island every year, the project ambitiously aims to alter the attitude towards environmental issues in the entire country.

The work, which is included in a pan-European project initiated by “MedIsWet”, a Mediterranean Wetlands Island network, and co-financed by the Swiss foundation “Mava”, started in October 2020 and is set to end in the autumn of 2022.

Its main goal is to restore the vital area of Limassol’s Lady’s Mile, which is part of the wider Akrotiri wetland system. However, according Stathis Theofilou, project officer at Terra Cypria, the point of contact for MedIsWet in Cyprus, the difficulties encountered are numerous and not easy to overcome.

“Since we started working in the area of Lady’s Mile, we removed over 100 tons of garbage,” he told the Sunday Mail. “This is a very sensitive area and work we undertook is extremely important for everyone to understand and appreciate how environmentally precious our land is.”

The Akrotiri peninsula is protected by the Ramsar Convention, an international treaty for the conservation and sustainable use of wetlands.

“The area has exceptional ecological value, as it supports a large number of rare, vulnerable or endangered species or subspecies of plants or animals,” Theofilou said.

The Akrotiri peninsula also hosts a large number of migratory birds of international importance, offering them habitat for rest, breeding and feeding. It is the most important migration route for birds of prey in Cyprus. More than 300 species of birds have been recorded, of which nine are protected.

It is also a home to a particularly significant subset of the Eastern Mediterranean flamingo population and a sea turtle spawning beach. On top of that, over 800 groups of plants have been recorded in the area, of which 13 are rare or endemic.

“However, despite its great ecological importance, the area is particularly affected by human activities, such as uncontrolled driving and reckless waste dumping,” Vakis Michael, an environmental officer working for the British bases (SBA) administration in Akrotiri involved in the project told the Sunday Mail.

“In general, the area receives a lot of pressure, which if not stopped and regulated will certainly be irreparably degraded over the next few years.”

Within the next months and until the end of the programme, other restoration and conservation projects planned in the area of Lady’s Mile and Akrotiri salt lake include the upgrade of the birdwatching hide of Lake Makria with the installation of informational signs with the species that the habitat hosts, as well as the installation of CCTV cameras in cooperation with the SBA authorities to detect and prosecute anyone entering the salt lake illegally and dumping waste in the area.

“The biggest challenge for us, however, has nothing to do with practical work,” Michael explained. “The most difficult thing is changing people’s mentality and making them understand just how lucky we are to have an area such as this one on our island.

“Since the start of the project, we had to devote an enormous amount of time to creating barriers around the lake that would prevent people from driving on it. And it’s not just the lake that needs protecting, it’s the dunes as well, since they are the perfect habitat for plants that sustain life in the entire area.”

Lady’s Mile is currently home to several establishments, such as cafes and restaurants, that are on a sensitive area and that represent a heavy disturbance for the surrounding fauna and flora.

“We had to visit every establishment around the lake and explain the importance of our project to the owners. Some were receptive and understood that uncontrolled dumping or creating ample parking areas around their business will end up greatly affecting the environment in Akrotiri,” Michael said.

“Others, unfortunately, seem unable to grasp what we are trying to do and this is a problem. Even a single establishment failing to respect the rules can end up harming our work.”

“On top of that, we also had to destroy all the illegal motocross tracks around the area,” Theofilou added. He explained that Lady’s Mile popularity in Limassol was a huge obstacle.

“We can all help towards the wetland’s protection in the long run with simple actions, such as driving only on the main road and avoid the lake’s banks and the sand dunes.”

While driving an SBA pick-up truck along the salt lake, Michael suddenly pointed towards an uprooted warning site surrounded by garbage outside a restaurant.

“See that? That is what we are up against. Until we change people’s mentality towards the environment, we cannot progress as a society,” he said.

“People need to start realising that dumping garbage and polluting protected areas is as serious an offence as a traffic one or a burglary. It’s a slow process and a difficult challenge for us, regardless of how important it is.”

President said no word yet from UN chief on new talks