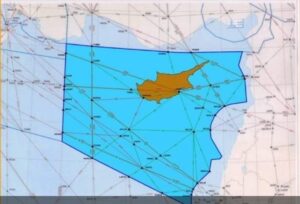 The Cyprus Republic has banned Russian flights, Turkey has not, highlighting once again the anomalies of flying into or over northern Cyprus

The Cyprus Republic’s decision to close its airspace to Russian aircraft and circulating a map showing the whole of Cyprus, has sparked a debate in the northern part of the island over whether Turkish Cypriots have their own separate airspace.

“No one can encroach on our airspace,” said Tatar in a statement.

Challenging this, Cem Kapısız, president of the Turkish Cypriot air traffic controllers’ union, asked: “If we indeed have an airspace, where does the money from the route charges go?”

A route charge is a fee collected for each flight performed in an airspace or route charging zone.

In practice, Turkey has allocated a portion – some 50-60 nautical miles – of its airspace to the Turkish Cypriots, according to Kapısız. “But this portion is still Turkey’s airspace. We are just controlling the air traffic there,” he explained

All the planes that fly in that portion coordinate with the air traffic controllers at Ercan/Tymbou, which is classified as an advisory airspace.

“In this airspace, we just give advisory services,” said Kapısız. “We have no authority or jurisdiction, like we would have if we had an airspace.”

Kapısız said that the air traffic controllers at the airport give service to some 700 planes daily. Only 60 of those planes land at or take off from Ercan/Tymbou. The rest are transit flights that pass over Cyprus through the portion allocated to Turkish Cypriots. This corresponds to a route charge of 8 million euros a year, which is paid to Turkey, according to the air traffic controller.

“Let’s say a plane has taken off from Larnaca. Ten minutes before entering the Ercan/Tymbou advisory airspace, the pilots voluntarily communicate with us for security reasons and give us all the necessary information,” said Kapısız. “Normally we should be getting that information from the Larnaca control centre. But because we don’t coordinate, pilots assume this responsibility.”

Even though there is no official coordination between the air traffic control centres in Larnaca and Ercan/Tymbou, traffic controllers still listen to each other through radio frequency to be aware of any last-minute changes regarding a flight or any urgent information.

Normally, plans about all flights must be sent to the European Organisation for the Safety of Air Navigation (Eurocontrol) in Brussels. Besides sharing these flight plans with the relevant countries, Eurocontrol, through these flight plans, determines the route charge each country should get. To prevent the Republic of Cyprus from asking for any route charge from the Turkish aircraft using Ercan/Tymbou, Turkey simply does not send any flight plans about these to Eurocontrol, Kapısız explained.

“The flight plans are only sent to us,” said Kapısız. Eurocontrol has no information or flight plans whatsoever about the flights to Ercan/Tymbou.

“As far as Eurocontrol is concerned, there are no such flights. Turkey has created for us a separate world away from the real world.”

Since Ankara does not send the flight plans of the planes using Ercan/Tymbou, it is impossible for transiting pilots to know how the air traffic over that part of Cyprus will be like, which is a serious security problem. The air traffic controllers in the Republic of Cyprus know about these flights only after they see them on the radar. On the other hand, the air traffic control centre at Ercan/Tymbou knows about all the flights in the Cypriot airspace since it gets from Ankara all the data including flights to and from Ercan/Tymbou and transiting flights.

“This is why pilots have to coordinate with the Ercan/Tymbou air traffic control centre,” said Kapısız. “This is the customary practice and pilots experienced in the route know what to do.”

Kapısız explained that even though Turkish Cypriots don’t have an official airspace, the air traffic control centre in Ercan/Tymbou has a very important function.

“It is critical that in practice we control the air traffic. Otherwise, there is no way a flight from Ankara to Ercan/Tymbou and a flight from Larnaca would know about each other.”